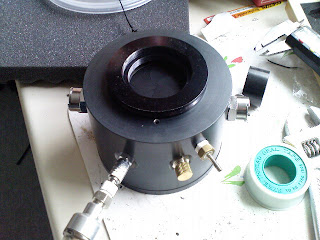 Eventually I will get the chip moved into a new casing from an established vendor. Though this will cost there will be advantages such as air cooling and improved readout noise. At least I'm now getting some use out of the camera, so I'm happy.
Posted by Greg Beeke at 20:50

Great hack on the Trifid. I should like to separate the components. How did Daniel outline going into the camera, etc? I like the idea of plugging the cooling ports and gassing the chamber. I've had excellent results, with my 6303E, using as directed.

Hi sorry for the late response. The outer case front is removed by undoing the outer screws at the rear. After removing the front, the shutter can be moved to one side once all six screws and stand-offs are removed. The shutter can then be refitted on one stand-off, rotated to reveal the round cover glass. If you need to get into the cold chamber, the round window must be removed. Undo the two screws/washers securing the window, lomg will all the sealant. Retain the sealant for when you reseal the chamber. Its messy stuff! Now the tricky part! Using a dressmaker's pin; one with a ball on the blunt end to get purchase, run this round the gap between the glass and the case to remove as much sealant as possible. The end of the pin can be bent over by a mm or two to get under the window. The aim is to release the sealant as much as possible. The sealant is cohesive so the ball of sealant you have can be used to pick up areas of sealant on the case. I used a suitably sized window sucker to lift the glass away from the case. The key is not to rush this process, and eventually the glass will lift. Be careful that no sealant drops onto the active area of the ccd, as there is no coverslip over the active area. With the window removed cover the chamber with strips of sellotape to mimise dust ingress and then go and take a well earned rest!

You can now remove any remnants of sealant by revealing areas of the chamber lip. I always kept most of the chamber protected by sellotape to prevent anything falling on the active area of the ccd.

When you come to seal up the window reuse the sealant and run it in a sausage shape into the ledge below the glass. Press home the glass and the job is complete. If you add ports then you probably don't need to put so much sealant on the top of the gap, as you can easily purge and refill.

Thanks for the hack, my Trifid is NW, no water, type. You've given me
insight on a mod. I plan to drill
the cold chamber and fit for dry air.